Every single shot has been first acted, then filmed, printed out, coloured in, water coloured,  and re-filmed under the animation camera. Then for each shot we draw, coloured, painted and scanned the background . Finally the different elements were imported in  the computer and we composited  the animation with the background and we start to animate the fog.

It roughly means we create about 25/90 frames (1-3 sec) a day from scratch depending on complexity. Here some gifs that show the last part of the process from the water-colour to the composited shot 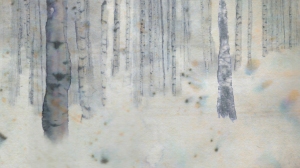 You are currently reading The Process at The Key - Blog.